Abuse in marriage and relationships is more common than what most people think. Domestic abuse also known as spousal abuse happens when a person in marriage or intimate relationship seeks to control or dominate the other person. Abuse in relationships is aimed at achieving one purpose: to gain and maintain power over the other person. Abusers do not play fair; they use guilt, fear, shame and intimidation to wear you down until you get under their thumb. As a result it is common for your abuser to threaten to hurt you, hurt you or hurt people who are close to you. 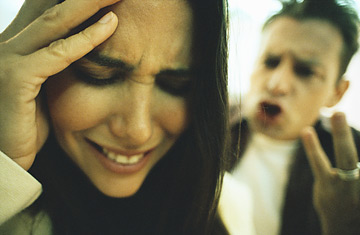 Most people tend to think that abuse in relationships only happen to certain people. What they do not know is that abuse does not discriminate. It happens among the poor, rich, young, old and cuts across all races. While more women are commonly abused, men are also abused.

Abuse usually escalates from threats to verbal abuse and violence. While physical injuries are usually the most obvious danger, the psychological and emotional consequences of spousal abuse are also severe. Abusive relationships can destroy your self-worth and lead to depression and anxiety. The good news is that no one has to go through this kind of treatment. Basically the first step to breaking free from abusive relationships is to recognize abuse when it happens.

There are many signs of an abusive relationship; however one of the main telltale signs is fear of your partner. If you feel like you have to walk on eggshells around your spouse and have to watch what you do in order to avoid a blow up, chances are that your relationship is unhealthy. Here are more tips on how to identify abuse in relationships:

Abusive partners tend to rule the relationship and make all the decisions. This may include timing a victim when they leave the house, checking on the victim and checking the odometer on the car as well as questioning the victim about where they go. The abuser may also check the victim’s emails, cell phone or website history. Abusers may control the finances and tries to instruct the victim how to dress, who to talk to and where to go.

Abusive people are usually highly insecure and rarely trust their partners. As a result they are usually jealous which they claim is a sign of love. Abusers usually question their victims about who they talk to and accuse them of spending too much time with friends or children. Since the abuser is highly possessive, they often keep their victims from interacting with other people by preventing them from working, or dropping them to school for fear that their partner will meet someone else. In addition the abuser may drop by unexpectedly or call the victim frequently.

3.History of past abuse

Most abusive spouses have a history of abusing other people including past partners. Though they may admit committing such acts, they often claim that their previous partners provoked them to do it. A batterer will beat any spouse they are with if the person is with them long enough for their violence to begin. Do not be fooled by their explanations that circumstances caused the person to abuse their spouse.

An abusive person is often highly unpredictable, sometimes he will be sweet and loving one moment and angry or explosive the next moment. Sometimes he will be the man who belittles you and sing praise to you with their next breath. Abusers often make the victim believe that if you just did something differently, he/she would be that loving spouse you have always wanted.

Whenever there is a break up, you expect a certain amount of resentment and anger toward the ex-partner; however you need to be aware of the person who is too focused on his ex-partner. Be highly suspicious of the person who talks about partners from his past in condescending or degrading ways. If the person claims that his/her former partner accused them of being abusive, the alarm bells should start ringing immediately. Be wary of the person who says that you are the first partner to treat them well unlike other partners in the past.

6.Intimidation or use of force during arguments

Abusive people rarely like to argue with their victims, they prefer intimidating them. Intimidation, even when it appears unintentional is a sure sign that emotional abuse is on the way or has already begun. This can also be a warning sign that physical violence may eventually follow. Intimidation can take the following forms:

Abusers usually have two set of rules, one for their behavior and another for their victims.